The Douro Chair was made by the majority of London campaign furniture makers during the 19th century, with W. Day & Son, J.W. Allen, Hill & Millard and The Army & Navy Store all illustrating it in their adverts. Also W. Smee & Sons of London illustrated a Douro Chair with a foot rest in 1850. The chair was named after the Douro River in Spain and Portugal, a place well known to the British troops fighting during the Peninsular War of 1808 to 1814. Who first designed and produced the Douro first and exactly when we are yet to find out.


This pencil drawing with watercolour was drawn by Lieutenant Edward Hovell Thurlow of the Royal Artillery and he titles it to the bottom centre of the picture. He has also noted in the left corner ‘Done in Bed, Nov. 27th 1856’ and initialed it. To the left is a Douro Chair with a sword leaning against it.

The 'Douro' was obviously a popular chair with these different makers producing them over such a long period of time. As with so may pieces of campaign furniture they were made with their own packing cases and as we have seen with other pieces the makers decided to make these cases have a secondary use as a piece of furniture by providing legs which when screwed in turned the case into a table or desk.

The painting below shows another barrack room with a square backed Douro. It is attributed to Lieutenant Edward Hungerford Delavel Elers Napier, circa 1835 and is entitled "My barrack room at Belfast" signed with initials, dated and inscribed, 'E.N./Belfast.del 1835' . This is the earliest depiction of the Douro we have which makes it interesting as it gives us a date that we know they were being made from.

The makers Hill & Millard made a model of Douro chair which conforms to the standard model of chair put with a brass rod to the top upright which would allow the top cushion to be attached stopping it from sliding down. The model below having the makers name stenciled to the canvas seat below the cushion. 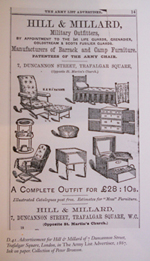 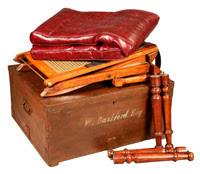 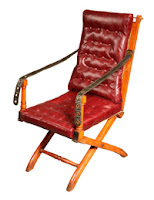 In stock at the moment we have a good example by J.W. Allen. ( below) the name being stenciled on the inside of the door of the packing case. As you can see J.W. Allen favoured the shaped back. As with most of the others we have seen the chair is made of Satin-birch  ( we did once have a model made of oak unfortunately with out a makers name.) and has the typical leather straps that allow the back to be reclined. We have had a model which had wooden arms with leather at the ends to allow for reclining. Sadly, this one also was missing a makers name.


Posted by Christopher Clarke Antiques at 05:58