Thomas Butler can perhaps be considered the ‘Grandfather’ of campaign furniture makers. Certainly all of the other cabinet makers who worked in or around Catherine Street in the early 19th century had, at some stage, been linked to him and went on to make very similar pieces to those of Butler. 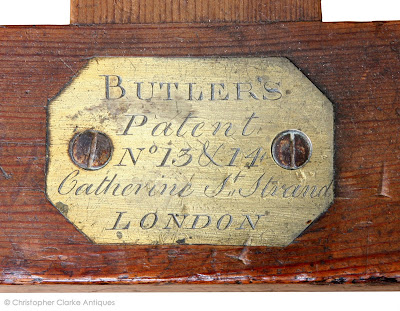 Butler is recorded as first starting in partnership with Edward Johnson at 146 Strand, which is opposite Catherine Street, sometime before 1787. Johnson had previously taken out insurance at 14 Catherine Street in 1784 and it may be that Butler was in his employment before they became partners with the plan that he would eventually take over the business. This would tie in with Johnson and Butler dissolving their partnership in March 1787, the stock auctioned by Christies and it seems Johnson stopping work as cabinet maker. The move to 146 Strand for a brief period may be explained by a line in the notice of the partnership’s dissolution, which also states the business was formerly of Catherine Street. The notice says all demands on the business can be made to Butler at the Strand until the Catherine Street address is rebuilt. It’s possible that 14 Catherine Street had been damaged by fire or simply that the property was being altered.

After running his own business for a short time, up to 1791, Butler joined in partnership with John Heppel at 14 Catherine Street. When the partnership was dissolved, Heppel moved out and set up in business as a cabinet maker at 55 Oxford Street.

Although he had previously made a variety of furniture with both Johnson and Heppel, Butler now concentrated his business on the manufacture of sofa and chair beds and described his premises, in adverts, as an Upholstery & Bedding Warehouse. There was a great interest in metamorphic furniture at the end of the 18th century and a sofa or chair that could be quickly converted to a bed no doubt proved popular. Four poster beds that could be easily set up and taken down were soon added to Butler’s range. By the turn of 1800 he had gone back to also manufacturing other cabinet work and supplied the Prince of Wales with two elegant mahogany Writing Tables in 1802.

It is easy to see how making metamorphic furniture progressed to campaign furniture and the Napoleonic Wars would have further increased the demand. A broadsheet advert of 1806 shows that Butler was producing Portable Chairs, Imperial Dining Tables, Escretoires and both Chair and Sofa Beds. These items were aimed at both the military and the domestic markets with designs also available in the Egyptian, Etruscan, Greek and Chinese manner. It was also possible for customers to provide their own timber.

Butler made the most of suggesting that he was the originator of a number of the designs of his furniture although this is a very grey area. It was not uncommon at the time for cabinet makers to use the word patent to describe their furniture even if they hadn’t actually taken a patent out. It was a means of elevating the design and suggesting it was protected. Butler is not listed as having taken out any patents of his own and it is known that he used his Catherine Street neighbour Thomas Waldron’s 1785 patent for a bed that could be assembled without the use of screws or nuts and bolts. Morgan & Sanders, who started as Butlers foreman and clerk before they set up in rivalry, also later claimed that they were the originators of some of his designs whilst working for him. It will probably never be known how many of Butler’s designs were original to him, conceived by others in his workshops or taken from other cabinet makers.


Thomas Butler was also a non-conformist minister at Charlton, near Hitchin and perhaps it was this secondary occupation that led him to retire and then return Catherine Street twice. In late 1800, he sold his business to Thomas Oxenham much to the chagrin of Morgan & Sanders, who believed it had been promised to them. They quickly set up as neighbours and competitors to Oxenham at Nos. 16 & 17 Catherine Street. The intense competition between Butler and Morgan & Sanders, led by the latter, was played out in the press over the next 10 years with each issuing adverts attacking the other.

Oxenham, originally a mangle maker in Oxford Street, didn’t last long. In 1802 Butler had taken the business back and continued for another 8 years. In 1804 he took out insurance on properties behind Catherine Street at 4 to 7 Helmet Court and Pegasus Yard, Savoy. This suggests that business was good, and he expanded. In 1810 he retired once more, this time selling the business to Edward Argles. Argles was a Cabinet Maker and Upholsterer from Maidstone, Kent and probably saw the move to London as a good opportunity to grow his business. Unfortunately, it didn’t work out for him and he was declared bankrupt in June 1813. 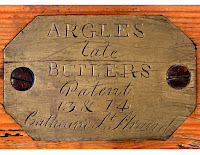 Once more Butler returned and set up again at 13 and 14 Catherine Street. He only lasted a year, perhaps because he had lost too many key employees. His son in law, John Steains, who had been with him since 1793, took the opportunity when Argles moved in, to set up in business with George Pryor and John Mackenzie who had also been employed by Butler. They established themselves at Brydges Street, which ran on north from Catherine Street. In July 1814, Butler retired for the final time and his stock was auctioned over 3 days. Morgan & Sanders later advertised that they had taken over a considerable part of Butler’s premises, as one final jab at their former employer.

Although Johnson and Waldron were fore runners to Butler in Catherine Street and Morgan & Sanders are perhaps the most recognised name of the two today, Butler’s influence on campaign furniture should not be under estimated. He capitalised on the interest in metamorphic furniture and the demand for campaign furniture. In doing so, he also paved the way for the other businesses to profit from the same markets. We group Butler, Morgan & Sanders, Oxenham, Argles, Steains, Pryor & Mackenzie and John Durham as the Catherine Street makers not just because of their location. They all produced very similar pieces, working to a number of the same designs which were first popularised by Butler. So much so that it can be difficult to determine which of them made one of the recognised designs without a maker’s label.


Recognition is due to Nicholas Brawer and Elizabeth Heyer for their seperate research on Thomas Butler and Morgan & Sanders.

More can be read about the some of the other Catherine Street makers on our website at the below links: