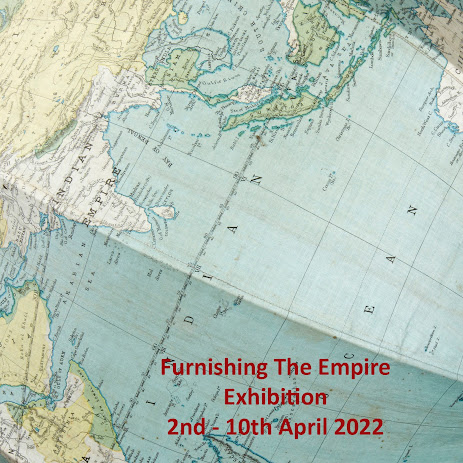 If you can't make it to our exhibition Furnishing The Empire, here's a quick walkaround video to give you a taste of the show. Its one of 9 exhibition for the Cotswold Art & Antique Associations Cotswolds Curated group of shops, so there's plenty to see if you wish to visit the area.

During the exhibition, which runs from the 2nd to the 10th April 2022, all items will be on our website. We will be posting videos of individual items during the exhibition which can be seen on the item's stock page  as well as our  YouTube and Instagram accounts.

Posted by Christopher Clarke Antiques at 03:30 No comments:

In May 2021, we were asked to give an online lecture to the British & Irish Furniture Makers Online (BIFMO) and the Furniture History Society (FHS). 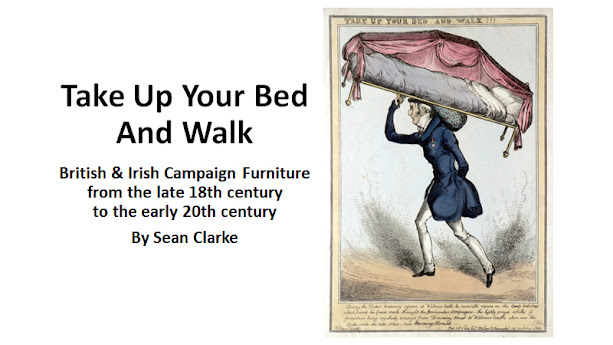 The history of campaign furniture, the different types of makers and those who used it along with its eventual demise are all discussed and well illustrated. Sean is introduced by Adriana Turpin of BIFMO and, following the lecture, questions are taken from the audience.

TAKE UP YOUR BED & WALK 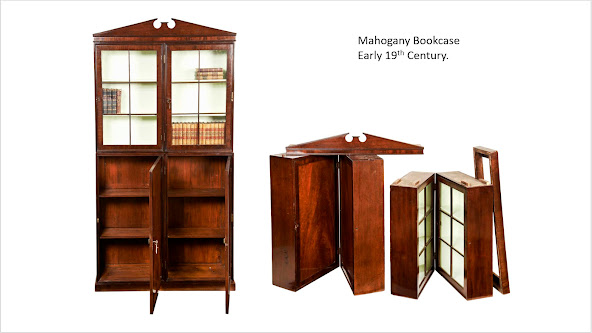 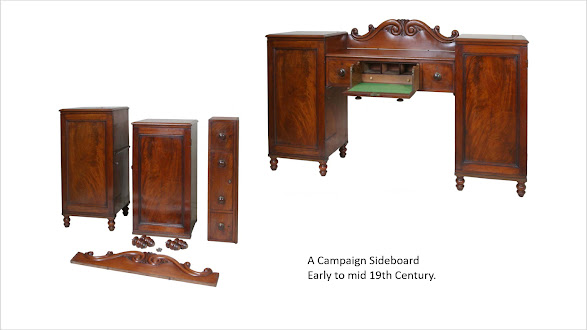 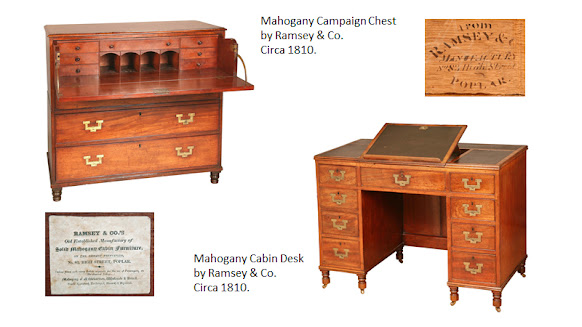 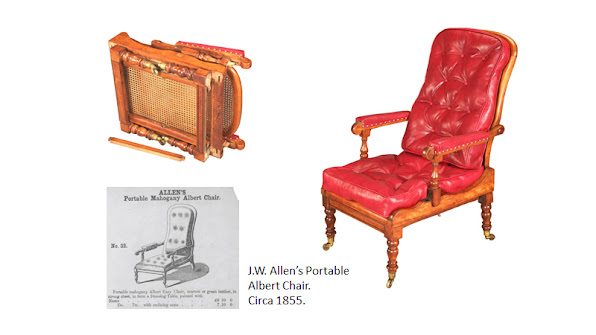 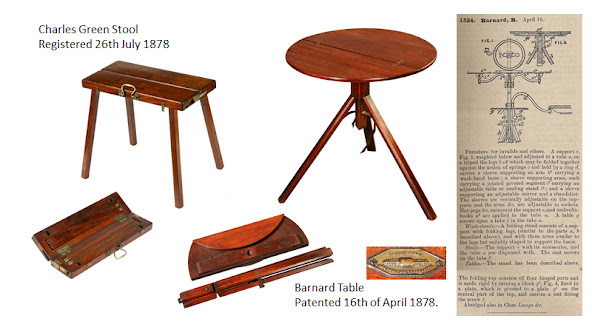 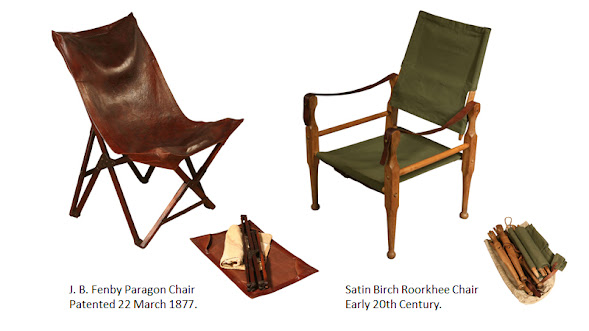 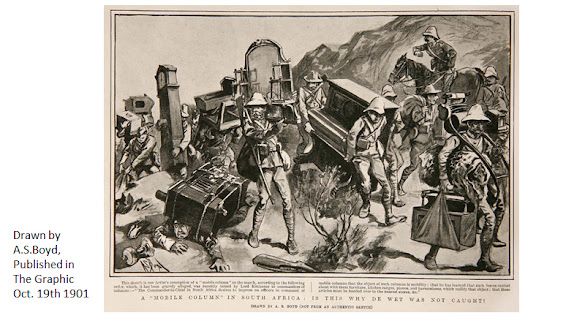 Our latest exhibition Receiving Orders is now on our website.

Search Receiving Orders to see all 70 exhibition items or sit back enjoy a video walkaround the show.

Posted by Christopher Clarke Antiques at 11:17 No comments:

At the beginning of February 2021, we gave a lecture to Stow Civic Society entitled Journey To Another World. This was an adapted version of a lecture that we gave during Stow Art Week to accompany our exhibition Illuminating India. 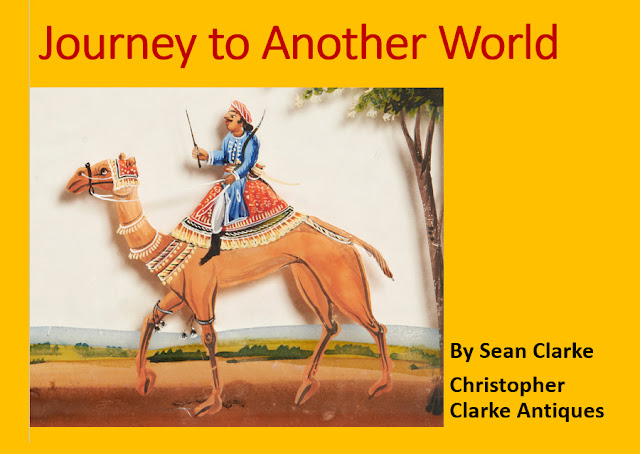 The lecture was recorded and can now be seen our You Tube Channel at this link:

Journey To Another World

The talk lasts about 50 minutes and in it we look at how people travelled to India in the 19th century, who went, what they took with them to make the long journey more bearable and the companies that outfitted them. 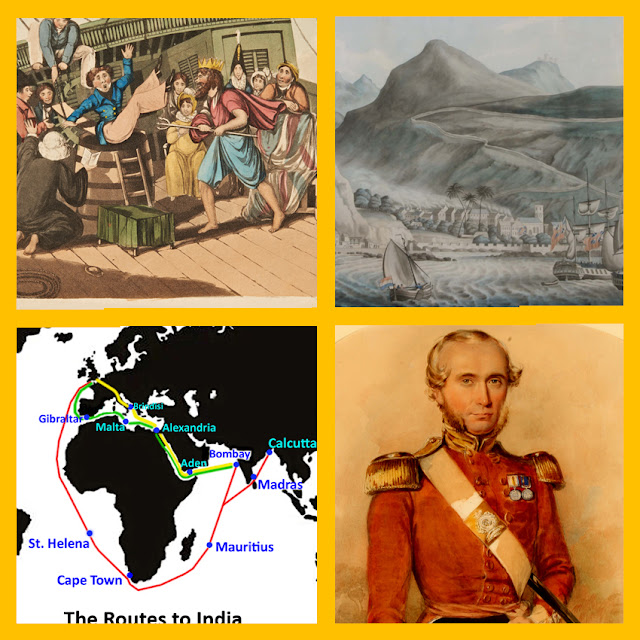 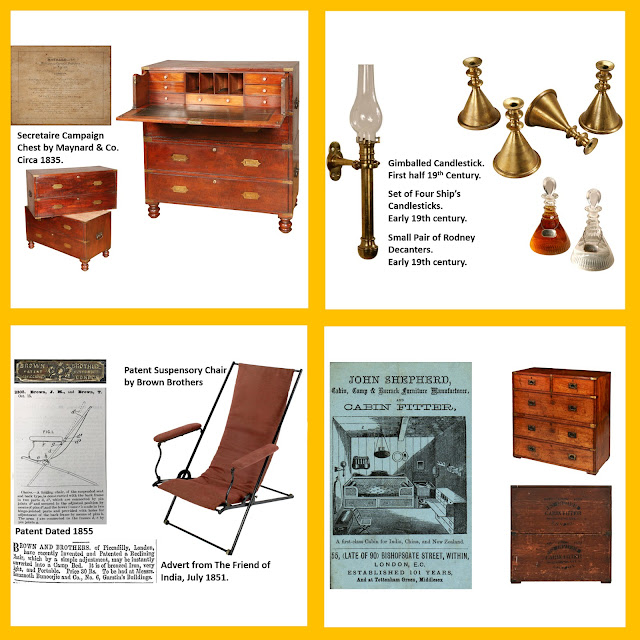 Posted by Christopher Clarke Antiques at 07:49 No comments:

We were recently asked to take part in a live LAPADA Leaders Webinar to discuss campaign furniture.

The title of the talk was Toys For The Boys (and Girls). Tim Bent of Bentleys and Alan Hatchwell of Hatchell Antiques also took part and talked about the luxury luggage makers and aeronautical and industrial design antiques respectively.

If you would like to watch the three of us discussing our passion for the antiques we deal in with Freya Simms of LAPADA, you can do so on the LAPADA You Tube channel by clicking on the image below. 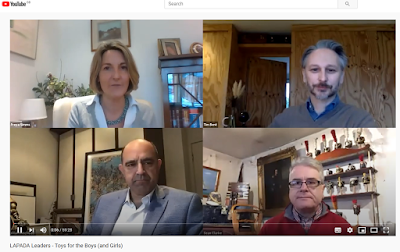 A walk around our exhibition The Salute

Our exhibition The Salute has just opened online, due to the lockdown but we though you might enjoy a walk around it with commentary.

Grab a drink, sit in your favourite chair and enjoy a 20 minute exhibition of campaign furniture and travel related antiques.

All the items are on our website, with descriptions and professionally taken photographs.
www.campaignfurniture.com

Posted by Christopher Clarke Antiques at 02:04 No comments:


From approximately 1735 through 1925, explorers, travellers, military officers, and European Royalty all employed a distinctive type of folding candlestick on their journeys.  Perhaps because of their resemblance when packed for travel to a now-forgotten English pastry, these candlesticks are colloquially and affectionately referred to today as 'Brighton Buns.'

A Brighton Bun consists of two drip-pan bases that screw together in such a way that they form a circular bun.  When unscrewed, the bases divide into two equal halves, revealing two loose candle cups.  When upturned, the drip pans form the bases for two chamber candlesticks into which the candle cups are screwed.  The candle cups are sometimes embellished with ring turnings, flared lips, or ejector slits through which the candle stubs may be removed.  The more elaborate Brighton buns contain conical snuffers.

The bases of these elegant and useful travelling chamber candlesticks range in size from approximately 3 ¼ inches to 6 inches in diameter:  Brighton Buns were made by casting, spinning, or pressing brass, bronze, and copper; rolling and spinning Britannia metal; hammering or pressing silver; or turning wood on a lathe.  Examples have been recorded in a variety of woods, ranging from olivewood, yew, and elm to ebony and Karelian birch.  By the early twentieth century, the traveller could order Brighton buns plated in silver, covered with 'Russia leather', 'American cloth,' or, for the more affluent, 'Crocodile leather.'

John Caspall has observed that 'Soon after their introduction, and in their early years, Brighton buns were invariably cast from brass or bronze, were always quite heavy, and carefully lathe-finished... Much lighter 'basin-halves' were formed by pressing from sheet material, and the rims were sufficiently thickened by rolling to permit a fine circumferential thread to be cut.'

Although the majority of Brighton buns currently on the market are of English manufacture, and more often than not made from pressed or cast brass, they were in fact made in a variety of countries, including Germany, Austria, and the United States.

During the height of British imperialism, travelling brass candlesticks found their way to some of the farthest corners of the Empire.  They were considered essential travelling kit by such early explorers of the Canadian frontier as David Thompson (1770-1857), a geographer who was based in Rocky Mountain House, a fur-trading post on the North Saskatchewan River in Alberta, British Columbia, at the turn of the nineteenth century.  In A History of Rocky Mountain House, Hugh Aylmer Dempsey published lists from early nineteenth century invoices and inventories that show the kinds of goods shipped by the North West Company's Columbia Department for the Indian trade in Montreal. In addition to axes, blankets, belts, garden seeds, ivory combs, playing cards, chocolate, coffee, cinnamon, cloves and camphor requested for the years 1807-1808 there is an entry for 'candlesticks, brass camp.'

Not only were Brighton Buns used by senior officers in the British army and intrepid explorers of the Canadian frontier, but also by European royalty.  An exceptional pair of sterling silver Brighton buns engraved with the monogram of Queen Charlotte Sophia, the consort of King George III (r: 1760-1820), and bearing hallmarks for 1808, appeared on the market in 2000.  Franz Joseph I, emperor of Austria (r: 1848-1916) was an avid collector of lighting devices that were popular in Austria and the Alpine countries from the fifteenth to the eighteenth centuries.  Among the devices in his collection was a pair of Brighton buns that Franz Joseph's cataloguer called a 'traveller's candleholder, which when opened and put together, provides two candle sockets and two bases.'

Brighton Buns were also popular in America during the Civil War and well into the late 19th century.  Illustrations of 'Camp Candlesticks' appear in the Catalogue of Arms and Military Goods published by the New York military furnishers Schuyler, Hartley & Graham, in 1864.  Similarly, in 1896, the Gorham Manufacturing Company of Providence, Rhode Island, illustrated a 'Travelling Candlestick' in their Catalogue of Sterling Silverware.

Though the Army & Navy Co-operative Society, arguably the most popular military and colonial outfitter of the Victorian and Edwardian periods, did not include Brighton Buns in their Price List of 1881, by 1907 they were offering Brighton Buns for sale under the catalogue headings 'Barrack Furniture and Camp Equipment,' where they are referred to as 'Brass Folding Candlesticks.'  They were also offered for sale through the Ironmongery Department, where they are described as 'Military, brass.'   At the same time, under the heading 'Stationery Fancy Goods,' they offered 'Travelling Candlesticks' covered in 'Russia leather,' 'Crocodile Leather,' 'Brass, 3 3/8 in. diameter,' 'Brass 3 7/8 in. diameter,' and 'Silver, 3 5/8 in. diameter.'  Similarly, around 1910, Harrod's Supplementary Export Price List offered 'Brass Candlesticks,' both 'large' and 'small' under the catalogue heading 'Barrack Furniture and Camp Equipment Department.'  Brighton Buns were still being advertised for military use by the Army & Navy Stores as late as 1925, when a pair of 'Brass Folding Candlesticks' is illustrated in the catalogue in the 'Barrack Furniture and Camp Equipment Department.' 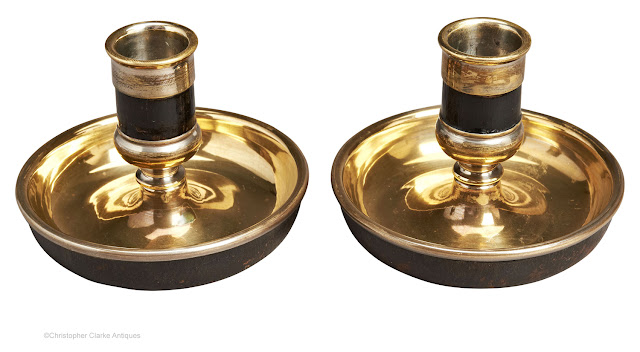 In 1787, A. Hepplewhite and Company published its belief that 'to unite elegance and utility and blend the useful with the agreeable has ever been considered a difficult, but an honourable task.' Brighton buns realize this maxim to the letter.

Nicholas Brawer is the author of British Campaign Furniture: Elegance Under Canvas, 1740-1914, published in 2001 by Harry N. Abrams, and was the curator of Britain's Portable Empire: Campaign Furniture of the Georgian, Victorian and Edwardian Periods, an exhibition held in 2001 at the Katonah Museum of Art in Katonah, New York. Nick has a shop in New York at 28 East 72nd Street at Madison Avenue.

The examples of Brighton Buns illustrated here are ones that we have sold. Further examples of travelling candlesticks can be seen on our website by searching 'Brighton Bun' or clicking on this link.

Posted by Christopher Clarke Antiques at 10:32 No comments: