To those who have not studied campaign furniture understanding military or campaign chests can appear quite confusing. When was it made? Where was it made ? Is it original ? What timber is it ?
We often come across military chests and other pieces of campaign furniture online that have descriptions that bear no resemblance to the piece in the photograph at all. Even antique dealers with many years experience fall foul of wanting a piece to be something that it is not or believe it to be much older than it actually is.
I hope that some of the information provided here may help you make a more informed judgement.

To start off with a few common mis-conceptions:

If a chest or other piece of furniture has carrying handles it must be campaign. It could be but not always. A lot of Georgian library furniture had wonderful substantial carrying handles but would never have been taken travelling. Can you imagine anyone taking a large astragal glazed bureau book case which has carrying handles to both top and bottom section on the Peninsula Wars ? We have certainly seen the top sections being sold as campaign purely because of the carrying handles. And what's this all about? A set of three Victorian mahogany campaign bookcases, mid-19th century

19th century two part brass bound campaign chests should have carrying handles. ( The maker must have forgotten with this one so we'd better put some on. )

Most mid to late 19th century campaign chest will not have side carrying handles as the chest would come with a couple of painted pine packing cases to transport the two sections. There are exceptions to this rule such as smaller Naval chests or Colonial chests. With experience you can tell if later handles have been added.


This chest splits in two so it must be campaign, right ? I recently came across a chest described as campaign that split in two that clearly was not. The explanation is quite simple and logical if you think about it. A lot of small cottages had narrow winding staircases. The solution to getting a large chest upstairs was what I would call the cottage chest. They tend to be Georgian and the main clue as to why they are not campaign is constructional. A true campaign chest whether it be Georgian or Victorian will be cabinet made with both sections having both top and base boards dovetailed into the sides for strength. The construction of a cottage chest will be different. The base of the top section and the top of the base section will be open with the two section fixed together with tenons or dowels fixed to the sides of the base section. These will slot into mortices in the sides of the top section. The chest below demonstrates this and is not the one I saw mis-labelled.

All campaign chests should have flush handles, brass corners and strapwork and have turned feet that should be removable. Not quite.The above description would be what most people think of as a military chest which will date to the middle of the 19th century. The campaign chest evolved through the Georgian period and on into the 19th century. In the Georgian period the main premise for the maker was to make a domestic chest or other piece of campaign furniture easier to transport and stronger to survive the rigors this involved. The look would strongly resemble the domestic equivalent which is why it is not immediately obvious they are campaign. There may be a moulding to the top, swan-neck handles, wooden knobs or bracket feet.

Campaign chests were used by officers in the military fighting battles across the Empire. Certainly, a lot were owned officers who were not prepared to compromise their living standards with the furniture and travel accouterments they took with them on their travels. We have had many examples where we have had the owners details noted on the chest that bear testimony to this. However, a lot of chests and other pieces of campaign furniture belonged to the multitude of other travellers who were either supporting the Empire or travelling to the colonies. It should be remembered that certainly pre-1900 and the Golden Age of the ocean liner, cabins on board ships were unfitted. The solution to this was the cabin fitter who could, at the shortest notice, provide all that a traveller may require on their long voyage ahead. 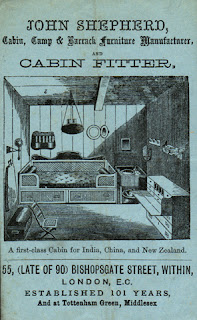 I hope that gives you a small insight into what you should be looking at when considering a campaign chest. As with any other type of antique if thinking about buying you are better off dealing with an expert. They know their specialty and you will get a piece that has been researched and correctly dated and described. You will also be paying what something is worth rather than buying something with a dubious description at a price that may not bear any relation to its true value. Just because a dealer is a specialist it doesn't equate that they are the most expensive merely that they know what the price should be as opposed someone guessing a number out of thin air. Prices of antiques will always be subjective with different dealers being able to charge more than others. Look online and see how the prices compare then decide who you feel more comfortable buying from.